The SEMA 2021 show arrived amid a persistent pandemic and uncertainty over whether or not the event would take place. Window film companies are seeing lighter crowds and less crowded aisles this year, but sometimes less is more.

The FlexiShield family poses for a photo.

“It’s odd, obviously the foot traffic is way less than it normally would be,” said Aaron Miller, International Sales Manager for FlexiShield. “However, the quality of the traffic is much higher. We have people who come here directly, [and] we are already sending them samples when we get back.

The Eagle Enterprises team focuses on its new model program, takes an industry update and looks to 2022 during supply chain challenges. Tj Clayton, sales, said the aisles are lighter but full of business opportunities.

West Hall at the Las Vegas Convention Center resonated with similar sentiments about business-to-consumer (B2C) interactions. Ryan Scislowics, Director of Sales and Marketing for KPMF, said: “People know exactly what they want and they go to the booths they want to see. Maybe in a busy year they don’t get so much direct attention. I think when we come back to that in a few years, we’ll all be happy to have come forward for it. “

This year’s show came with some hurdles, but Subramanyam Krishnan, Sales Director of Global Window Films, met some attractive clients. 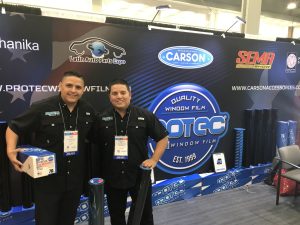 “Previously there were large crowds,” Krishnan said. “But the quality of the crowd was such that even the most interested customer walked past you. Seeing that we are able to give individual attention, we seem to have a good quality crowd. People are interested in the business, want to buy [and] want to be associated with the brand.

This year’s show is Protec Window Film’s seventh and an opportunity for its team to present their new nano ceramic film. Sales representative Oscar Lopez said the crowds were lighter, but he’s happy to be back in person after a year of promoting digital connections, a sentiment shared by attendees and exhibitors.