A week ago I warned silver bulls that a major support zone was being tested. It was make or break week. You all know I’m optimistic when it comes to white metal. However, I need to trade the charts I see rather than the charts I WANT to see. Unfortunately, we have a big technical breakdown which does not bode well for the money. Not what silver bulls want to hear a day before the Vancouver Resource Investment Conference.

If this happened, the Fed would have to suspend its current monetary policy and one would think that it would start to CUT interest rates in order to stimulate the economy. The problem is that inflation will always be there. It doesn’t matter if the inflation is purely non-monetary, ie: supply chains, rising oil prices, etc. This will be a problem if the inflation is monetary, i.e.: 85% of all dollars ever printed have been in the last two years, no productivity increases so we have a situation where there is has more money in the real economy pursuing the same number of goods and services. Many are already saying that the United States is seeing stagflation, a situation where the economy is weak but inflation remains high. Even former Fed Chairman Ben Bernanke is anticipating stagflation.

I don’t know about you, but heritage preservation is always at the forefront of my mind when determining what to do next. A lot of people go cash, which is a good position. But maybe not so much in times of inflation. As Ray Dalio has warned for years, “cash is trash”. It is likely that governments will continue to print money and increase the money supply, which will make inflation worse. The Federal Reserve can actually get away with reverse repurchase, or commonly known as reverse repurchase.

Precious metals are still where you want to be, and to be honest, we were expecting another big drop due to the strength of the US dollar. Money from all over the world comes up against the security of the US dollar. If the dollar bull run continues, we will start to see issues with emerging markets with high US dollar-denominated debt. To put it bluntly, a stronger dollar will wreak havoc on the world. It could lead to another kind of plaza deal where the dollar has to be devalued, and probably lead to some kind of new economic system, or a reset of the current economic system.

Let’s start with the weekly chart. A major outage confirmed people. Last week’s candle closed below our $22 support zone. A price floor that has held five times since September 2020. When support has held this long, a breakdown is a very significant turn of events. In the case of silver, a bearish turn of events. Technically, we expect silver to drop lower than the support in the $18 area.

There is potential for good news. A fake breakdown. Whenever price breaks or breaks out, we tend to see price pullback to retest the breakout zone before the trend resumes. In this case, silver is currently looking to retest our breakdown zone. If by the end of this week, silver manages to close above $22, we have a confirmed false breakdown. Sellers would be trapped and their stop losses triggered. We would then continue the uptrend with silver targeting $25 and $28 for the rest of the year. 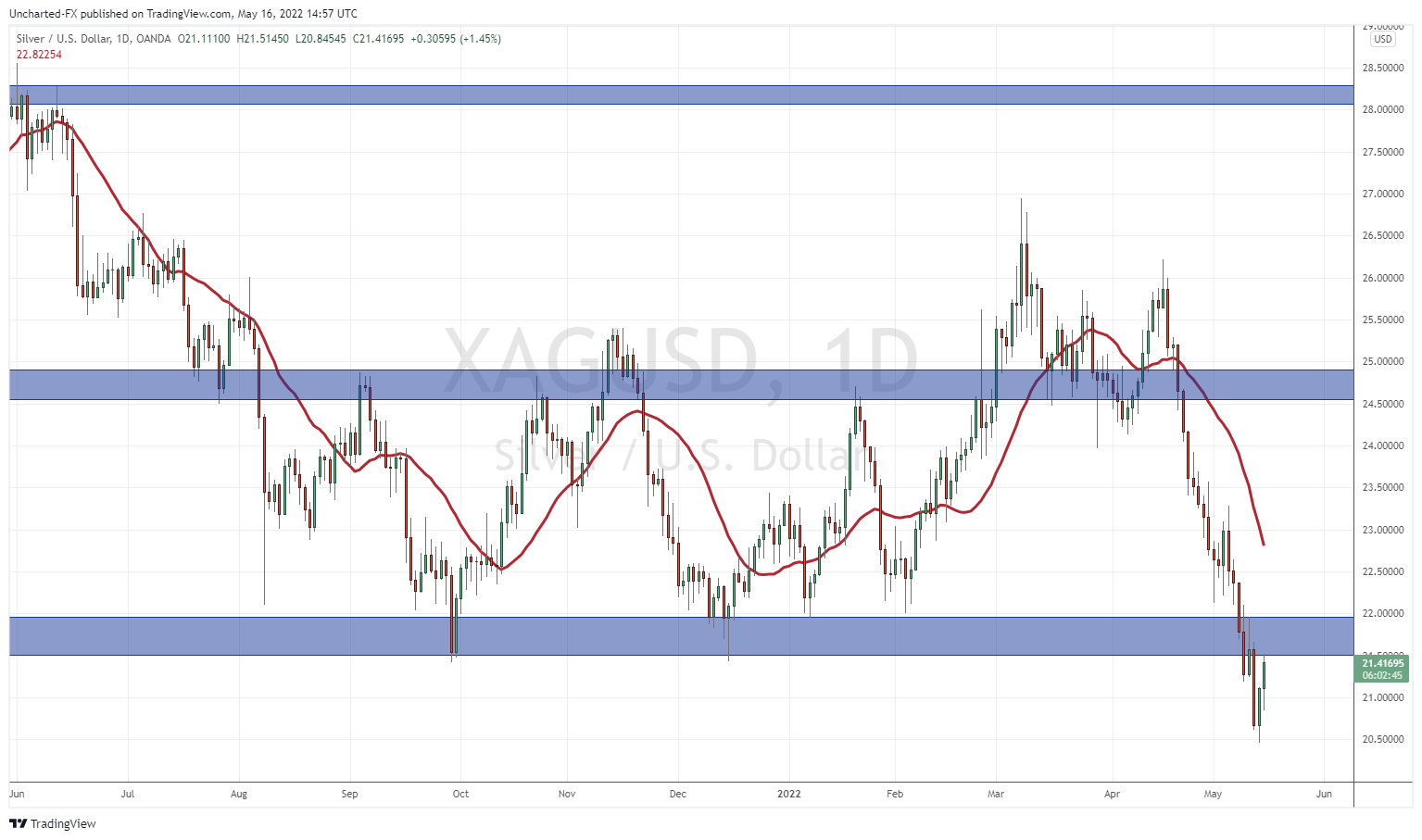 If we go to the daily chart, you can spot the major inflection zone quite easily. A large resistance zone between $21.50 and $22. Silver is testing this area right now. If we can continue to form green candles to the top, it prepares us for this false weekly breakdown confirmation. However, if we see silver stalling here, or even printing a large red candle, then downtrend resumption is on the cards. In technical terms, we would print a lower high in the current downtrend.

Still bullish for silver and gold over the long term, but we can’t ignore this major weekly technical breakdown. Expect lower prices unless we can confirm a false breakdown and rally back above $22. Now might be a good time to get ready to buy some cheap bullion or buy some silver miners you’ve been eyeing.