SYDNEY, NS “Dillan MacNeil may be young, but he knows very well which way the wind is blowing.

The Sydney entrepreneur, who is no stranger to the restaurant industry having first entered the competitive hospitality market aged 20, has opened three restaurants in the last six years. Two no longer exist, but the third is doing well after opening amid the COVID-19 pandemic.

“I’m very lucky to be here,” said the humble 26-year-old restaurateur, who started Dillan’s On Townsend in December 2020.

“There were a lot of places that didn’t really survive COVID and others that say they haven’t picked up lost stuff yet, which happened at the other place.” 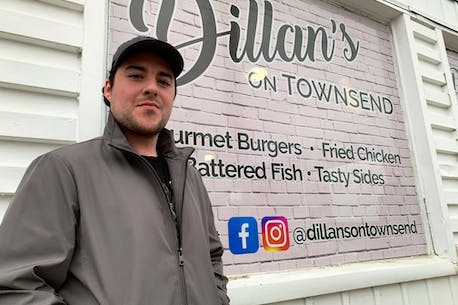 The “other location” MacNeil refers to is Dillan’s in Wentworth. It was the cafe he ran on George Street from 2018 until the end of last month when he closed the store to focus his efforts on his Townsend Street initiative. He describes his latest venture as a “little take-out shop with huge flavor.” It turned out to be a good decision given the popularity it has enjoyed since it opened a year and a half ago.

MacNeil may claim that luck helped him along the way, but he also possesses a business instinct that has developed since childhood. Her father was a pastry chef and her aunt ran restaurants for more than three decades. And as a child, MacNeil made sweets and candies which he sold on consignment to the old Wentworth Perk cafe which he would later buy and change the name to Dillan’s at Wentworth.

In 2016, he and his business partner Nick Paruch created Joe Hollywood’s Gourmet Take-Away in a small square on Victoria Road at Whitney Pier.

“It was fun, but I was really young, maybe a little naive,” MacNeil recalls.

After six months the partners called it quits and MacNeil worked a few jobs in the industry before opening his cafe in the Wentworth Park area in March 2018.

“Ha, things were good, then the world came to a standstill because of COVID,” he said, adding that business dropped drastically due to lockdowns, travel restrictions and fear. general public to be in crowded places.

“It’s hard to compete when you don’t have a drive-thru like Tim Hortons or Starbucks where people line up every morning.”

MacNeil has attempted a number of initiatives to keep Dillan’s in Wentworth afloat during the pandemic. A year ago, he launched a pasta pop-up experience that he hoped would keep customers coming back to the store.

“We spent last summer doing the pasta pop-up and although the reception was pretty decent, there was still a lot of desire for us to come back and do the coffee and the pastries, which is what the building was for. known,” he said.

“So we ended up going back to Labor Day last summer, but we kept some of the most popular items from the summer and incorporated them into the cafe menu.”

At the same time, MacNeil was finding success with his Townsend Street operation.

“There were a lot of requests for me to focus on Townsend Street,” he said.

“So I looked to see if I could finish my lease (Dillan in Wentworth) and it turned out the landlord was going to list the property so it was good for both of us.”

MacNeil now devotes all of his professional efforts, and much of his time, to Dillan’s on Townsend, which continues to do well as society returns to normal.

“We opened this store during the pandemic because so many people were ordering takeout,” he said.

“Since we were known for our burgers and sandwiches when we had Joe Hollywood on the pier, I thought maybe a similar menu could help us get over the COVID hurdle until we can get back to the normal. But it just took off. And since then, it has become our main objective.

MacNeil plans to limit his Townsend Street operation to five days a week later this summer. After six years of intensive effort, he is looking for a little more free time. However, he admits that he will probably spend most of his time working on two projects close to his heart.

He wants to finish a cookbook he’s been working on for some time and he wants to break into the specialty sauce market.

“We started working with sauces for the pasta pop-up and experimented with all kinds of ingredients,” MacNeil said.

“We hope to launch at least one product on the market in the next few months. We’ll have it for sale here and online. We’ll try to get into boutiques and hopefully bigger stores like Sobeys, but it’s too early for those conversations.

Spoiler alert – “Dillan’s” sauce most likely to be marketed is its bacon jam which it describes as a “bacon, caramelized onion, sweet molasses” spread.

“I don’t know what to call it yet, but it’s by far our most popular sauce,” he said.

In the meantime, MacNeil plans to continue offering its popular fare at the most reasonable prices possible.

“We were having supply chain issues, but now everything is just more expensive,” he said.

“Thanks to COVID we had to wait for some things but now it’s easier, it just costs more. The thing is, we don’t want to scam anyone, but business is business and we want to stay in business. And we don’t want to cut corners. So there may be a slight price increase. But that said, we will charge the fairest price possible. »

David Jala is a business reporter at the Cape Breton Post.